Abi began her professional theatre career in Fort Worth at Casa Manana Theatre when she was 7 as a featured tap-dancing orphan in Annie. At Casa Manana, she performed in over 20 productions, working with, studying with, and learning from many great actors, directors, and choreographers including Bud and Franny Franks, Ed Holleman, Joel Ferrell, Kevin Ligon, Tom Orr, Jody Madaras, General McArthur Hambrick, Mel Dacus, and Guy Stroman. Some of her favorite theatre productions include Anything Goes (Bonnie), Annie Get Your Gun, Fiddler on the Roof(Tzeitel), Moon Over Buffalo (Eileen), 42nd Street (Diane Lorimer), The Desert Song (Azuri), The King and I, and Sorcerer's Apprentice. She has appeared as a feature dancer in Sonic commercials (alongside Frankie Avalon), in a PB Max candy bar promotional film, and in a Dr Pepper industrial production. She has also done commercials for Fort Worth hospitals and for Junior Achievement.

Her choreography credits include Fiddler on the Roof, 25th Annual Putnam County Spelling Bee, Seussical, Jr (assistant choreographer to Jeremy Dumont), Thoroughly Modern Millie, Love's Labour's Lost (as a 1949 musical), Sound of Music, Catch Me if You Can, and Wild Party.

Abi is currently in the studio recording vocals and keyboard on a full length album with Fort Worth original rock band, Jetta in the Ghost Tree, and is also choreographer and cast member in the new immersive theatre project, The Sophistication of the Old Fashioned.
A HUGE Thank You to my always supportive Mom and Dad, and to the amazing artists in Open Classical Experience! 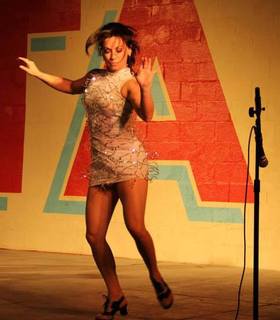