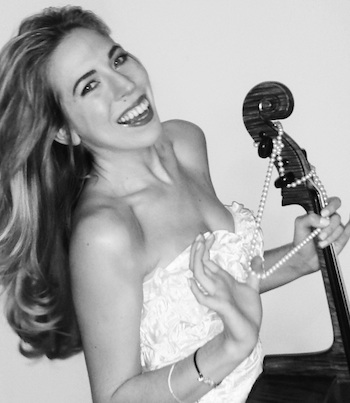 Alejandra Alderete is a native of Laredo, Texas and began her music education as a piano student at the age of five. During the 7th grade, she was introduced to the cello through her middle school orchestra program and immediately fell in love with the nature of the instrument. Although she had a late start, she developed her foundational skills at the Vidal M. Trevino Magnet School of Fine Arts and Communication and was the principal cellist for her high school orchestra and region orchestra her junior and senior years. She attended music seminars during the summers giving her the opportunity to work with acclaimed educators such as Phyllis Young and attended the first annual UNT Cello Clinic held by Eugene Osadchy.

She began her college studies with Emmanuel Lopez at West Texas A&M University where she graduated with a Bachelor of Music degree, All-Level Ed. Certification and later completed her graduate degree with a Masters in Music Performance. During these years, she was a participant in Masterclasses held by cellists such as Sharon Robinson, Jean-Michel Fonteneau, and Richard Slavich. She maintained a busy performance schedule with Amarillo symphony and has acted as Principal cellist for Chamber Music Amarillo, Amarillo Opera, and Amarillo Little Theatre. She explored mixing with local musicians of all genres and was house cellist for Covenant Records as well as other studios and churches in the area.

Besides her love for performing, she has been an influential teacher for many students in the panhandle. She held a successful private studio during her graduate studies and accepted her first public school teaching position as a 5th grade beginner strings director in 2009. In 2010, the Amarillo Youth Orchestra opened its youngest ensemble, the Amarillo Preparatory String Program, which she became the director and helped pave the way for first year musicians. She was also on faculty as a coach for the Amarillo Youth Symphony cellists and various ensembles at the WTAMU Chamber Music Camp, directing the middle school level camp orchestra in 2012. In 2014, she founded the Amarillo Youth Symphony “Summer Variations” camp, which proved to be fun for all levels and included a slight twist, such as a “flash mob” at the local Happy State Bank downtown building performing a commissioned piece, “Yankee Doodle Verdi for Flash Mob Orchestra”, by composer friend and fellow cellist, Noah Littlejohn.

Currently, Alejandra serves as the assistant orchestra director at Cockrill Middle School in McKinney, TX. She spends her evenings with her dog, Siri, and enjoys hiking, drawing, practicing and spending time with family and friends.