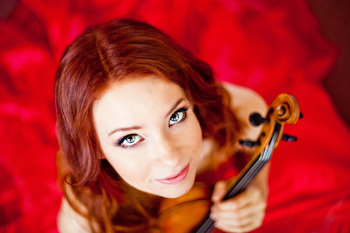 Silver medalist of the 2008 Ima Hogg Competition, Chloé Trevor, is one of the rising stars on today’s international violin scene. Critics have acclaimed Chloé for her “dazzling technique”, “excellent musicianship”, “huge tone”, “poise and professional grace” and “a bold personality unafraid to exult in music and ability”. She has appeared as a soloist with several orchestras, including the Knoxville Symphony, Hong Kong Sinfonietta, Latvian Chamber Orchestra, Plano Symphony and the Slovak State Philharmonic.

Chloé was the Grand Prize winner at the 2006 Lynn Harrell Competition, the 2005 Lennox Competition, the 2003 Dallas Symphonic Festival Competition and the 2000 Collin County Young Artists Competition. She has been a featured violinist in the Music in the Mountains Festival in Colorado, at the Meyerson Symphony Center in Dallas and with the Missouri Symphony Orchestra. She was also chosen to perform on the nationally syndicated From the Top radio program.

In 2004, Chloé appeared as a soloist with the Lutoslawski Filharmonie (Poland), the Teplice Philharmonic (Czech Republic), the Muncie (Indiana) Symphony and the Missouri Chamber Orchestra. She also performed as a soloist in the 2004 Young Prague Festival in August. Recent performances include solo appearances in New York at Avery Fisher Hall in Lincoln Center, a tour with the Latvian Chamber Orchestra in Riga, Tchaikovsky's Violin Concerto with the Dallas Symphony, and Prokofiev's 2nd Violin Concerto at Sala São Paulo in Brazil and with the Cleveland Institute of Music Orchestra as a result of winning the Cleveland Institute of Music's 2007 Concerto Competition.

Chloé's 2007-2008 season included a full recital sponsored by the Fine Arts Chamber Players of Dallas in memoriam of Cleveland orchestra bassist Charles Barr and a performance of Tchaikovsky's Violin Concerto with the Houston Symphony in June. She also performed a full recital at the Music in the Mountains Festival with pianist David Korevaar, and opened the Indianpolis Chamber Orchestra's 2008 season with the Barber Violin Concerto. In 2009, Chloé performed the Brahms Violin Concerto for the Missouri Symphony’s “Hot Summer Nights” Opening Gala and was invited to return to Knoxville to perform the Beethoven Violin Concerto with the KSO in their 2010- 2011 season.

In 2013, Chloé performed the Shostakovich Violin Concerto No. 1 for the Missouri Symphony’s “Hot Summer Nights” Opening Gala, and was a guest soloist with the Bohuslav Martinu Philharmonic in Zlin for their annual Christmas concert. In November, the Dallas Morning News described Chloé as an artist “supplying tonal refinement, technical facility and natural musicailty” in her performance of Mozart’s Violin Concerto No. 5 with the Musica NOVA Orchestra. Chloé is engaged to perform with the Southern Arizona Symphony Orchestra in 2015.

Chloé was introduced to the violin at age 2 by her mother, Heidi Trevor Itashiki, Dallas Symphony violinist. She later studied with Arkady Fomin, Dallas Symphony violinist and Artistic Director of the New Conservatory of Dallas. She completed her undergraduate degree at the Cleveland Institute of Music studying with David and Linda Cerone, and her graduate degree as a scholarship student at Rice University studying with Kenneth Goldsmith. Chloé plays on a Carlos Landolfi violin made in Italy in 1771, and is on faculty at the Music in the Mountains Conservatory.