Jiah Kyun, South Korean violinist, graduated with both a Master of Music of Performance and Performer Diploma at Southern Methodist University. Before coming to Dallas to study with renowned violinist and former concertmaster of the Dallas Symphony Orchestra, Emanuel Borok, Jiah has lived and performed in many different parts of the world such as South America, Europe, U.S.A, Africa, and Asia. She received the Honor Student Award for her Undergraduate degree at the Moscow P.I.Tchaikovsky Conservatory in Russia. She was also featured on national television as a soloist, performing the Sibelius Concerto with the Uzbekistan National Symphony Orchestra for the commemoration 18th Anniversary of Independence Day of Republic of Uzbekistan and a Laureate of the “XXI Century Art” Competition in Ukraine.

Jiah is an active player as a chamber and orchestral musician. She performs different genres of music from all around the world. 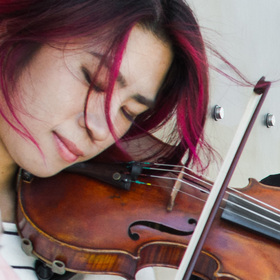