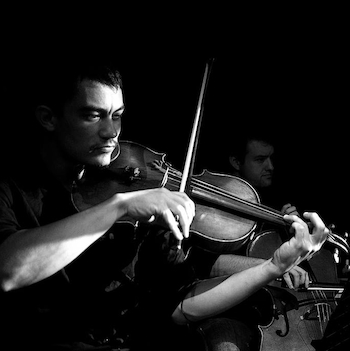 Julian Tello Jr. is an undergraduate student at TCU studying Viola Performance under the tutelage of Dr. Misha Galaganov. Prior to this, he studied viola with Dr. Jennifer Clark and Alyson Dawkins at the University of Texas at San Antonio, where he spent the first two years of his degree. While at UTSA, he was named the winner of the UTSA Concerto & Aria Competition two years in a row, resulting in his performance of the Walton Viola Concerto in 2011 and the Bowen Viola Concerto in 2010, which was also the Texas premier of the work.

At TCU, he was named winner of the 2012 TCU Concerto Competition for his performance of the Bartok Viola Concerto and was also awarded the TCU Faculty and Friends Chamber Music Award in September 2012. During his studies at UTSA and TCU, he has had the opportunities to perform in public masterclasses for concert violinists Elena Urioste, Jaime Laredo, Cynthia Roberts, and Itzhak Perlman and violists Gertrud Weinmeister, Susan Dubois, Michael Klotz, Toby Appel, Kathryn Steely, and Roberto Diaz.

An active freelance musician, Julian has played with the Symphony of the Hills, San Angelo Symphony, Brazos Valley Chamber Orchestra, and currently serves as Principal Viola of the Abilene Philharmonic, TCU Symphony, Odysseus Chamber Orchestra, and the Texas Baroque Ensemble. Julian will be studying at the esteemed Curtis Institute of Music in the fall of 2015 under Roberto Diaz and Hsin-Yun Huang.