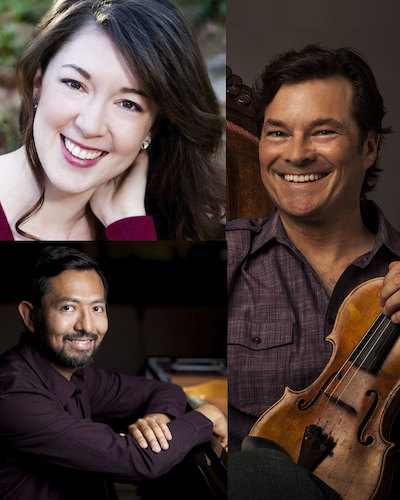 On the web (or web enabled TV)

This April 23 concert was professionally filmed and is available for streaming through May 8.

is proud to present Open Classical in a program featuring pianist Masaru Sakuma, soprano Allison Stanford-Jones, and violinist/violist Mark Landson in a concert of beautiful and powerful Bolivian song and chamber music.

Ms Stanford-Jones was the 2018-2019 Fulbright U.S. Scholar to the Bolivian Plurinational Conservatory of Music, where she taught voice, researched Bolivian art song, and performed in many concerts in Bolivia. In La Paz, she premiered the leading female role in El Compadre, composed by the important Bolivian composer Nicolás Suárez, and became enthralled with his song cycle “Monologues of the Desert”, which you will hear on this program.

Masaru Sakuma hails from La Paz, Bolivia, and first collaborated with Allison in a 2011 concert at the Goethe Institute in La Paz in which they performed works by Bach and Schubert. Over the years, both Masaru and Allison continued to perform, research, and write about Bolivian art song, and collaborated long distance throughout the first year of the pandemic producing videos of some of their favorite pieces, which aired on Open Classical's At-Home Showcase Concerts.  Thanks to both Open Classical and Undermain Theater, they are finally able to perform this beautiful music together in-person with a live audience.

Allison Stanford-Jones is a soprano based in Austin, Texas. She was the 2018-2019 Fulbright U.S. Scholar to the Bolivian Plurinational Conservatory of Music, where she taught voice, performed in concerts, and researched Bolivian art song.  With the Bolivian National Symphony, she premiered the role of Flor in Nicolás Suárez's true-life opera El Compadre, and recently reprised the role in a new production.  She has sung as a soloist with the Phoenix Symphony, at the Meyerson Symphony Center in Dallas, and at the acclaimed Aspen Opera Center. She has sung a variety of roles in opera, operetta, and musical theater, including Lauretta in Puccini's Gianni Schicchi, Cleopatra in Handel's Giulio Cesare, The Governess in Britten's The Turn of the Screw, Mabel in Gilbert & Sullivan's Pirates of Penzance (ProMusica Arizona), Yum Yum in The Mikado (Oxford Shakespeare Festival), and Lucy in You're a Good Man, Charlie Brown!. She was a finalist in the Texoma Region NATSAA Competition, a past winner of the National Opera Association Competition and a national finalist in both the Macaroni Grill Opera Sing-Off and the Music Teachers National Association Young Artist Competition.

Masaru Sakuma is a Bolivian pianist. As a member of BOMUSA, Bolivian Musicians in the U.S.A., he has been dedicated to promoting Bolivian classical music by organizing and performing online concerts as well as beginning to build an online database of Bolivian classical composers. In the past year, he has joined soprano Allison Stanford in an exploration of Bolivian art song with performances streamed on the online series Open Classical. His doctoral research has focused on Bolivian composer Jaime Mendoza-Nava (1925-2005) and Bolivian musical nationalism. Masaru is currently embarked upon the recording and publication of piano and vocal works by Jaime Mendoza-Nava, to be released by M2 Film Music LLC. Prior to moving to the U.S., together with the “Ensemble of Bolivian Music from the XIX and XX Centuries,” he participated in conferences and concerts in La Paz, Bolivia and Arequipa, Peru that promoted piano and vocal works by Peruvian composer Pedro Ximénez Abril Tirado. Masaru also serves on the board of founder members of the Centro de Estudios Musicales Bolivia.

Masaru has performed in music festivals in Bolivia, Peru, and the United States and has also been invited as a guest artist to the Saarburg International Music Festival in Germany, and the Institute for the International Education of Students (IES) in Vienna, Austria. Committed to community outreach, he has organized concerts that seek to bring closer together classical music and audiences from all backgrounds. His most recent programs include the recitals “Dances from Around the World” and “Goodbye to 2020” presented at the Unitarian Universalist Congregation of Phoenix, Arizona. Masaru is top winner of several piano competitions in Bolivia and has also won the First Honorable Mention in the Claudio Arrau Piano Competition in 2003 in Chile and the First Prize in the University of Central Arkansas Piano Competition in 2010.

Masaru obtained his diploma in piano from the Bolivian National Conservatory in La Paz, where he studied under Russian pianist Irina Efanova. Upon graduating from the conservatory in La Paz, he received a scholarship to the University of Central Arkansas, completing his masters degree and graduate certificate in Piano Performance as a student of Dr. Neil Rutman. He pursued his doctoral degree in Collaborative Piano at Arizona State University, where he studied under Professor Russell Ryan.

Mark Landson is a violinist, violist, composer, founder and Director of Open Classical, and the founder of the new classical chamber group Neo Camerata. Based in Dallas, Texas, he has been featured in numerous television and radio interviews and press articles as a prolific contributor to the creative culture of North Texas  Dallas Observer has featured him in “Top 100 Creatives in Dallas”, and arts magazine TheaterJones featured him in their “Forward Thinkers” arts entrepreneurs series. His new classical compositions have been praised in reviews as “Stravinsky at his most lyrical”, and “a unique combination of pop inspiration and classical craft”. Landson’s stated focus is to take the audience on a journey of emotions through motivic exploration, melding the techniques of classical composition with contemporary pop harmonic language and pacing. Within every context of composition and performance, his mantra is “It’s not the audience’s job to pay attention. It’s the role of the artist to command attention.” Recent commissions include an operetta “Goldilocks” (Dec 2015), ballet “Le Mozart Noir” (Feb 2016), and cello sonata (April 2017). In December, 2016, the first movement of his string quartet “Travels” took first place at the third installment of “The Ear” competition in New York, chosen among 750 overall entries, and 9 final live round contestants.

11.Romance (a duo) by Nicolas Suarez (voice, viola, and piano)