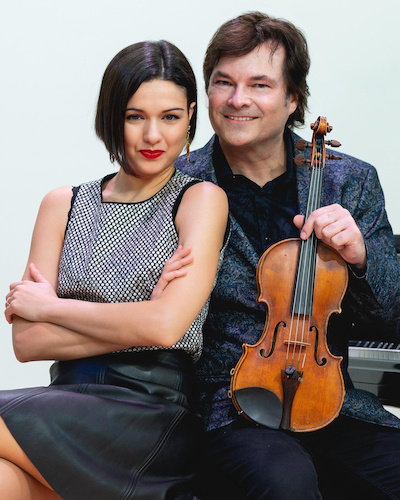 The violin/piano duo of Mark Landson and Patricia Garcia Hill (Gil) combines the forces of an award-winning American composer/violinist/violist and one of the most dynamic Spanish pianists on the world Classical music scene today.

Mark Landson has been called “the Elon Musk of the North Texas classical music scene” for his multiple talents as a performer, composer and classical music visionary behind the organization Open Classical. Hill is a Spanish pianist based in Florence, Italy. Music has brought them together and created a fast bond of passionately shared musical ideals.

They met in May 2019, when Hill was on tour in the USA and performed a successful recital on the Open Classical Artist Series in Dallas. When she heard Landson’s original compositions, she suggested they look for opportunities in Europe to perform them together. Their duo debuted in October 2019 in Barcelona at the MEAM Museum, and followed with November dates in Dallas, Fort Worth, Austin and Houston. This trip brings their New York debut at Scorca Hall and a Philadelphia recital at the Trinity Center.

Apart from their shared passion for creating a new modern emotional music aesthetic, Landson and Hill enjoy interpreting the classical repertoire, which you will hear in the Mozart Sonata in A Major. Patricia Hill is a world renowned expert in the field of historical piano practice of the fortepiano, the early form of piano used by Mozart and his contemporaries.

Next on the program is Landson’s Suite from “Le Mozart Noir” a ballet collaboration with Ballet Dallas and the Dallas Bach Society, a commission from the Donna Wilhelm Family New Works fund. The work presents vignettes from the life of Le Chevalier de Saint George, a fascinating and world famous character of 18th century Paris who was known as the “Black Mozart”. The son of a French nobleman and his slave mistress, Saint George was a legendary swordsman, violinist, composer and soldier.

The finale of the program is Landson’s work “Travels”, a metaphysical journey in 4 movements. Landson wrote much of the piece while living in Spain in the 1990’s. The work tells the story of a protagonist’s quest to keep optimism in his life in the face of the inevitable difficulties we all face. The work was the grand prize winner of the 2016 edition of “The Ear” in New York City, a competition where the audience is asked just one question: “Do you want to hear that again?”