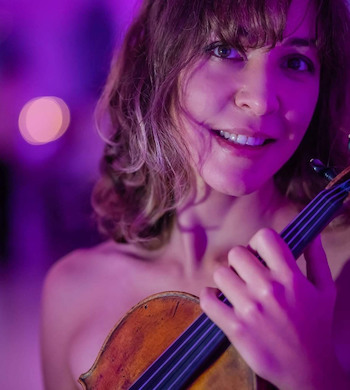 Russian-born violinist Dina Nesterenko established herself in the early years of her career as a winner of numerous competitions and as a frequent soloist with the orchestras throughout Russia. In 1995 Ms. Nesterenko won the Second prize in the Kloster Schontal International Competition (Germany), where she was also awarded the “Virtuoso” special prize. In 1997 she won the First prize in Classica Nova International Competition (Hannover, Germany), dedicated to Dmitri Shostakovich.

In 1998, after winning the Second prize in All – Russia National Violin Competition (First prize was not awarded), Ms. Nesterenko was honorably selected to represent Russia in 1998 Tchaikovsky International Competition in Moscow, where she was a semi-finalist and also the youngest participant.

Her most recent achievements and engagements include: participation in the Marlboro Music Festival in the summers of 2010 and 2011, where she had several successful performances; solo performance of Prokofiev Violin Concerto No. 2 with Stony Brook Symphony Orchestra with the conductor David Lawton (December, 2010); winning Cosmo and Bauno International Competition which resulted in Weill Recital Hall performance (December, 2009); Claude and Pamela Frank workshop “Finding the voice in Beethoven and Schubert”, hosted by Carnegie Hall, which gave her the opportunity to perform Beethoven Sonata op. 96 in Weill Recital Hall (December, 2008); solo appearance with Rockaway Five Town Symphony orchestra in Long Island, NY; Alice Tully Hall performances of Sonatas by Corelli and Couperin (2003, 2004).

Ms. Nesterenko holds her Graduate and Undergraduate degrees from the Juilliard School and an Undergraduate Diploma from the Curtis Institute of Music. She holds a Doctorate Degree in Violin Performance from Stony Brook University.