Formed in 2011, Altius Quartet has quickly become one of the most exciting young ensembles in the United States. Altius actively concertizes in Colorado, where it is the resident quartet of the Western Slope Concert Series, and has also toured throughout the United States. Altius Quartet is also committed to outreach, and often performs concerts and teaches master classes in public schools and music programs. In July 2013, the quartet began its residency with the Inspiration Point Fine Arts Colony where they teach and perform in Eureka Springs, Arkansas. In addition, the Quartet has coached chamber music and performed at Music in the Mountains Conservatory in Durango, CO.

Altius Quartet has performed for the most respected string quartets and pedagogues in classical music including Miro Quartet, Shanghai Quartet, Kronos Quartet, Arnold Steinhardt, and James Dunham. The quartet served as the first Ensemble-in-Residence at Southern Methodist University in 2013 where they were coached by Matt Albert, Emanuel Borok, and Andres Diaz. During their residency at SMU, they represented the university with recruitment and outreach programs in the Dallas-Fort Worth Metroplex.

Currently, the Altius Quartet is the Graduate String Quartet-in-Residence at the University of Colorado-Boulder where they are mentored by the Takács String Quartet.

In their spare time, members of the Altius Quartet enjoy watching and playing fantasy football, spending time with their dogs, and strive to sharpen their witty, and at times borderline inappropriate sense of humor. 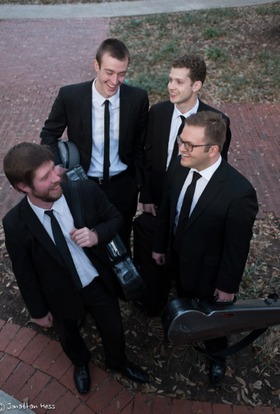