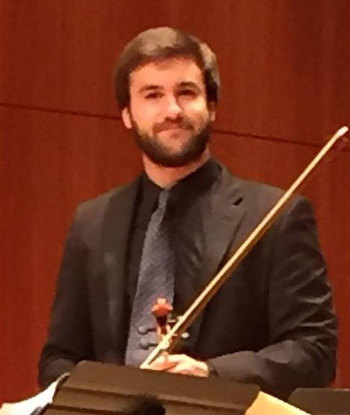 A recent graduate of the Eastman School of Music, Devin Camp has studied on the violin from the age of 10 with Mark Lewis, then later with Amanda Brin of the Hyperion String Quartet. He has played as the Principal Second Violin of the Empire State Youth Orchestra: Devin performed with the ensemble on a tour of China and South Korea, as well as a performance in the Tanglewood Music Center’s Seiji Ozawa Hall in 2012. Later becoming concertmaster of the same orchestra for two years, Devin led the ensemble to a featured performance at Carnegie Hall.

Active in chamber music, Devin is the founding first violinist of both the Amici String Quartet and the Windsor Piano Trio, as well as the Stratus String Quartet at Eastman. He has coached and played in masterclasses with Michael Emery, the American String Quartet, the Ying Quartet, Peter Oundjian, Trio Cleonice, Michael Kannen, and the Kalichstein-Laredo-Robinson Piano Trio. Devin also received Honorable Mention in the 2013 Lois Lyman Competition, was a finalist with the Windsor Trio at the 2016 Coltman Chamber Music Competition, and later won the MTNA Senior Chamber Music competition in 2017 with the Windsor Trio. During his final two years at Eastman, Devin also served as a board member for OSSIA New Music, ultimately assuming the role of Vice President.