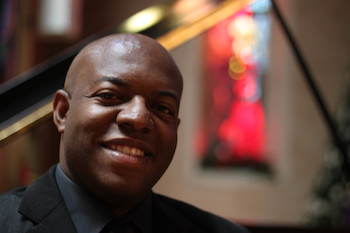 The Press Enterprise (Riverside, CA) hailed his “dazzling technique” and his “clean, tidy approach.” Music critic Laurence Vittes described him as an “illumination in music,” and said of his all-Beethoven recital: “Marshall presented a recital so full of musical thrills and beauties, and so in identification with the composer’s own persona, that, for a few hours, it was as if he were communing across the centuries to conjure up a rare and magical musical spectrum.” The Telegraf Online Constanta (Romania) reported that Marshall “captivated the audience” in Mozart’s Piano Concerto no. 20, which he conducted from the piano.

Eldred Marshall began studying the piano at age six and played in public by age seven. His prodigious and inquisitive mind allowed him to master large swaths of the piano repertoire quickly as well as consistently win top prizes at the competitions he entered as a child. By 16, he debuted with orchestra, playing Brahms’s Second Piano Concerto with the Victor Valley Symphony Orchestra. Before entering into Yale University, where he graduated with honors with a B.A. in Political Science, he had already performed all over the United States.

The critically-acclaimed pianist has performed internationally: Spain, Italy, the Republic of San Marino, Belgium, Germany Romania, Bulgaria and the Ukraine. He has performed the entire cycle of 32 Piano Sonatas of Beethoven in public, from memory, as a concentrated series, twice: once in Portland in 2007 and in San Francisco in 2008. He followed that project with a full West Coast (US) tour of Bach’s Goldberg Variations in 2008 and 2009. In the 2015-2016 Season, he toured extensively through Texas with two all-Bach piano recital programs, one of which included the Goldberg Variations. In 2016, he was named a semi-finalist in the Ninth J. S. Bach International Piano Competition in Würzburg, Germany. He has appeared in piano festivals in Italy as well as the United States. Orchestrally, conductors with whom he has collaborated orchestrally include K. C. Manji, Carlo Ponti, Beau Benson, Greg Grabowski, Michelle Merrill, Jonathan Moore and Jessica Morel.

Marshall earned three M.M. degrees from SMU: piano (2011), organ (2012) and orchestral conducting (2013).  Currently, he is finishing his D.M.A. in Piano Performance at UNT, where he studies with Pamela Mia Paul.  Additionally, he was awarded a Teaching Fellowship at UNT and is an adjunct lecturer at SMU. His doctoral dissertation topic is on the art of conducting piano concerti from the piano – performance practice, discipline and whether or not it is “real conducting.”