Lauded for his “impassioned and vigorous” playing (Pianomania), Evan Mitchell is quickly becoming a young artist to watch. This season, Evan’s richly varied schedule of well over 50 appearances includes solo recitals, concerti, chamber music, and performances as an orchestra keyboardist. His performances have been deemed “incredibly beautiful” (Fanfare), “amazing” (Fort Worth Weekly), and “no less than stunning” (Lima News). Evan’s recording of Claudio Santoro’s Sonata No. 4, “Fantasia” (1957) is featured on the 2012 CD release, “Piano de Pampa y Jungla: A Collection of Latin American Piano Music.”

Evan’s performances have been heard in New York’s Steinway Hall and Weill Recital Hall at Carnegie Hall, and in seven countries on three continents. A November 2012 recital on the PianoForte Foundation’s Salon Series Live was broadcast to 45,000 listeners on WFMT (Chicago) and streamed online. Additional performances have been broadcast on FM 91 (Northwest Ohio) and WFHB (Bloomington, IN). Evan has soloed in concerti with such ensembles as the Fort Worth Symphony Orchestra, Lima Symphony Orchestra, and Victoria Symphony, collaborated with conductors including Miguel Harth-Bedoya, Darryl One, Crafton Beck, Richard McKay, and David Effron, and performed chamber music with members of the Cleveland and Brazilian Symphony Orchestras.

A passionate and articulate advocate for the arts, Evan looks constantly for ways to reach new audiences, and to inspire in others a love for music. In the 2012-13 season, he is a featured artist for Musical Awakenings®, the signature educational outreach program of the Van Cliburn Foundation, which exposes more than 30,000 public school students annually to classical music. Evan is also a concert reviewer for the website www.Bachtrack.com, where he aims to enrich the listening experiences of a diverse readership. In his programming, too, Evan balances the great works of the repertoire with underappreciated gems. He plays not only the staple concerti of Beethoven, Brahms, and Rachmaninoff, but also lesser-known pieces by Richard Strauss and Leonard Bernstein, and commands a solo repertoire ranging from J.S. Bach and Padre Antonio Soler to Toru Takemitsu and Lowell Liebermann.

A native of Montclair, New Jersey, Evan holds a Master of Music and Bachelor of Music with High Distinction from Indiana University’s Jacobs School of Music, where he studied with Arnaldo Cohen. Evan received scholarships from the School of Music and Hutton Honors College as an undergraduate, and a highly selective Associate Instructorship in Piano as a graduate student. He is currently working with Van Cliburn Competition Gold Medalist JosÃ© Feghali at Texas Christian University. When he finds himself away from the piano, Evan enjoys sailing and following his favorite — and perennially disappointing — professional sports teams. 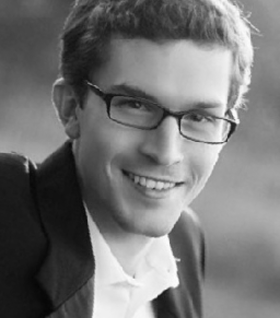