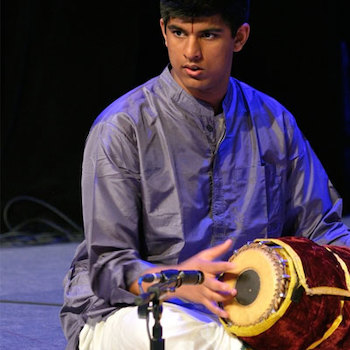 Jay Appaji has been studying the mridangam, the primary drum of South India, with internationally-acclaimed percussionist, Dr. Rohan Krishnamurthy, since 2009. He regularly performs in Texas and has performed in national venues including the Cleveland Thyagaraja Festival and Kilbourn Hall at the Eastman Summer Percussion Institute. He was selected for the prestigious Texas Commission on the Arts' 2014 Young Masters Grant and the Percussive Arts Society’s M&J Lishon/Franks Drums national scholarship in 2013.  And he was recently selected for the coveted 2014 IndianRaga Fellowship, one of only 12 selected in North America.

Jay is passionate about pursuing music at a professional level and collaborating with musical traditions from around the world. He was recently part of a collaborative Tap comedy, Tappy Thanksgiving, at Pocket Sandwich Theater in Dallas for which he composed a short mridangam-Tap piece with Katelyn Harris of Rhythmic Souls. He has been the lead percussionist of a music ensemble Raag Rhythm (RR) from the time of its inception in 2011 and through RR he has helped raise funds for organizations that facilitate music education in under-privileged communities in the USA and India.

Jay is interested in the perception of rhythm by the human brain and is conducting related research with Dr. Jay Dowling at the University of Texas at Dallas. Jay is a senior at Plano Senior High School, Plano, Texas and lives with his parents and sister.