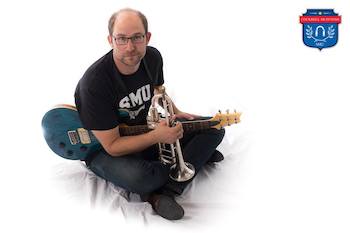 Jon's path as a musician is somewhat atypical.  That is to say that not many individuals join the United States Marine Corps as a means to start a career in music.  After graduating high school, Jon reported to Marine Basic Training and Marine Combat Training, then assumed his appointment in the "Commandant's Own," United States Marine Drum and Bugle Corps.  In this capacity, Jon performed with a variety of well-known celebrities and for audiences including Queen Elizabeth II of England, President George W. Bush, and various other heads of state.  In 2003, Jon was appointed as Ceremonial Bugler for Marine Barracks, Washington D.C, and was awarded the Navy Achievement Medal for his outstanding performance in that role.

Upon completing his enlistment, Jon went to DePaul University to study with Chicago Symphony trumpeter John Hagstrom and freelance trumpeter Matthew Lee.  Jon graduated with a B.M. in 2009 and continued on to study Educational Administration at University of the Pacific in Stockton, California, where he earned a M.A. and completed a highly respected thesis on expert musical achievement.   Jon then moved to Dallas after he was recruited to be a Residential Community Director for Southern Methodist University.

Since moving to Dallas, Jon has earned a reputation as an excellent trumpet player, largely due to his well-developed sound and undaunting musical commitment.  Jon is also a photographer, specializing in portraiture and photographing musicians in the Dallas Community.

Jon is currently pursuing his Masters in Business Administration at the Cox School of Business, is a Program Coordinator for Open Classical, and served as the Student Life Coordinator for the  Annual Lev Aronson Cello Festival.