Joseph Kuipers, born 1984 in Rochester, MN, made his solo debut in his native Minnesota, performing the Elgar Concerto at the age of 16. Since then he has performed at festivals and music centers around the globe, and shared the stage with fellow musicians such as Sergio Azzolini, Rudolph Buchbinder, Michael Flaksman, Ernst Kovacic, Geoff Nuttal, Felix Renggli and Ragna Schirmer: and at festivals including the Ravinia Music Festival, Aspen Music Festival, Les Festival International du Domaine Forget, Kronberg Academy, Ascoli Pinceno Festival, Carl Orff Festival, and the World Cello Congress III.

Joseph completed his undergraduate studies at the New England Conservatory of Music in Boston, where his primary teachers were Paul Katz for cello and Pozzi Escot for composition. In order to immerse himself in the European Music Tradition, he subsequently studied for five years in Germany and Switzerland. In 2008, Joseph received an Artist Diploma from the Hochschule für Musik und Darstellende Kunst Mannheim, Germany; where he studied with Michael Flaksman. Most recently he completed his Master of Musical Arts from the Musik-Akademie der Stadt Basel, Switzerland, where he studied with Thomas Demenga. Other important influences came from Anner Bylsma, Bernard Greenhouse, Mstislav Rostropovich and Hong Wang, and in chamber-music from Rainer Schmidt of the Hagen Quartet.

Dedicated to the music of our time he has worked extensively with composers of our time, among them Robert Cogan, Heinz Holliger, Helmut Lachenmann: and has performed with the Ensemble für Neue Musik Basel, Neue Musik Ensemble Mannheim, Second Instrumental Unit, New York, and the Callithumpian Consort of Boston.

Together with his sister Rachel he is co-artistic director, and cellist of the Marinus Project, an international collective of chamber musicians dedicated to the tradition of classical music in our time. Marinus is the “Ensemble in Residence” at Washington and Lee University and Eastern University. In April, 2011 the Marinus Ensemble received a $200,000 unlimited artist development grant to further the Marinus Project.

As a committed teacher, Joseph has a private studio of cellist in Plano /Dallas, TX; served as teaching assistant to Michael Flaksman; taught at the Carl Orff Festival, Italy; and the Biningen School for Gifted Children in Switzerland. He is also on faculty at Eastern University, PA.

He plays a cello from Francesco Gobetti, known as “The Marinus” ca. 1710.

Aside from his musical activities Joseph is an avid photographer, chess player, and trout fisherman- and can often be found in the great outdoors with his Australian Shepherd dog, Yelka. 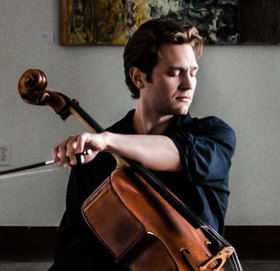