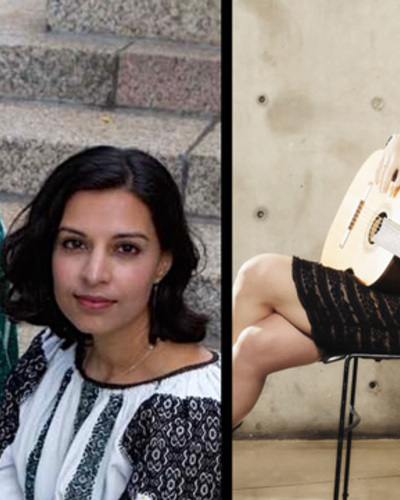 Get two amazingly intimate sonic experiences in one incredible show.

The Nightingale Trio is a women’s vocal trio inspired by traditional folk songs and vocal techniques from the Balkans and Eastern Europe. Their pure vocal stylings have been featured on NPR’s Prairie Home Companion and they have delighted audiences in live performances around the United States.

The Nightingales sound fuller than a trio, yet still maintain the intimate, tight harmonies of a family band. Though dedicated to recreating the rhythmic, complex, and stunning folk songs that have spanned centuries of Slavic artistic culture, the Nightingale Trio also strives to expand the boundaries of the traditional folk by bringing their own unique forms of expression and creativity to the dynamic and ever-evolving art form.

Watch the Nightingales perform in a frozen cave in Minnesota below... 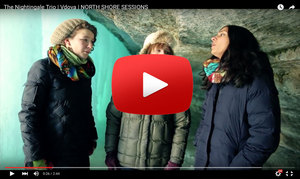 And here are the Nightingales on Prairie Home Companion... 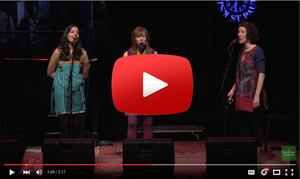 Kithara Duo (Olga Amelkina-Vera and Fernand Vera) was formed in 2002, when they were graduate students at the University of North Texas. Since then, they have performed nationally as well as in Europe and South America. Kithara Duo’s critically acclaimed debut CD, Beings, was released by Soundset Recordings in 2011.

The duo is home to an international award-winning composer (Olga), and their first album is a world premiere recording of her music for guitar duo. In addition to Olga’s original compositions, Fernand and Olga regularly contribute to guitar duo repertoire through arrangements and transcriptions of music by such composers as Albeniz, Ferrabosco, Soler, and Vivaldi. Their second CD, Lingua Franca (2015), features their new arrangements of music from the Renaissance to the 20th century. 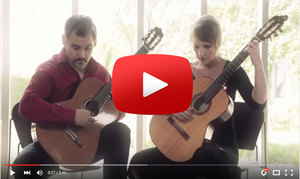 Note: RSVP is $6 to this event, which is the venue charge.
$You-Name-The-Price ticket paid in addition after entry to the concert.