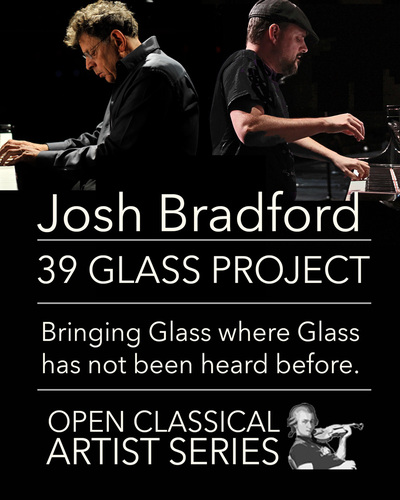 Josh Bradford celebrates his own 39th birthday by giving a special concert dedicated to Philip Glass, one of the most influential composers of the last 40 years, in the year that the iconic composer turns 80. The composer of numerous flim scores (The Hours, The Truman Show, Koyaanisqatsi) and distinctive instrumental and vocal textures, Philp Glass had his hit opera “Einstein On The Beach” breakthrough in 1976 when he was also 39 years old.

Josh will present Glass compositions that have been a part of his own repertoire for the last two decades along with brief stories about the influence Glass has had on his own artistic development. He will also perform an original composition that pays homage to the Glass style.

This concert serves as the kickoff for Josh Bradford’s own 12-18 month “39 Glass project”, a multi performance project dedicated to honoring the Glass legacy by bringing the music of Glass to audiences who have never been exposed to it, many in non-traditional concert venues. Bradford’s goal is to give at least 39 performances during the span of the project.