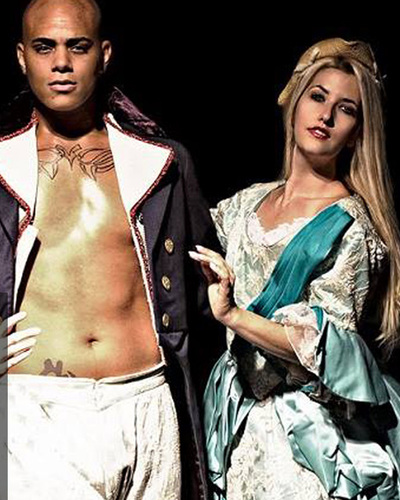 The dance style is contemporary ballet with episodes of period dance, bringing in a modern element to help bridge the centuries for today’s audience. Period social dance is by Baroque choreographer Catherine Turocy and Haitian dance expert Marcea Daiter.

This original ballet tells the fascinating true story of one of the 18th century's most famous, yet forgotten characters: a mulatto man who was considered to be the epitome of the renaissance ideals of the age.

THE STORY
The son of a French nobleman planter and his black slave mistress, the ballet tells the dramatic story of Joseph Boulogne, later famously known as the Chevalier de Saint-Georges. He was a champion fencer, a virtuoso violinist, conductor of the leading symphony in Paris in the 18th century, and was colonel of the Legion St. Georges - the first all-black regiment in Europe during the French Revolution.  As conductor, he commissioned Haydn and as composer he influenced Mozart, ultimately becoming known as Le Mozart Noir among the French bourgeoisie.

Prominent within the production will be the intriguing music by the Chevalier, as well as, new compositions by Dallas composer, Mark Landson. “The music I've written conveys a sense of the 18th century aesthetic, but is combined with current pop harmonies and rhythmic variations”, says Landson. He adds, “the present day listener comes away with an impression of freshness and vibrancy.” The idea is to affect the listener of today in a similar way to how the people at the time would have been affected, rather than provide a museum piece that feels disconnected from present day life.

This unique evening, funded by a grant from the Donna Wilhelm Family Fund of TACA, will be given in cooperation with the Booker T. Washington School for the Arts, in their fabulous Montgomery Arts Theater.