Launch of the New Canon Orchestra 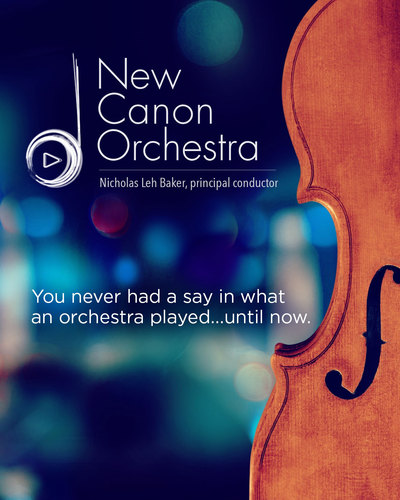 The launch of our new orchestra where YOU tell us what new music you want to hear. The search for the new canon of classical music is on!

Sammons Center for the Arts

Have you ever noticed how classical music is the ONLY genre of music where you have NO say in what you hear in a concert? Have you ever been to an orchestra concert where a recently written piece is played and you said, “Who in the world said they wanted to hear THAT???”

Well, now the answer to that question will be - YOU did - the audience!

We’re searching for the new “canon” of classical music - the set of pieces that people want to hear again and again! We’re not as interested in premiers as we are in discovering what new works are worth listening to again and again. Pieces you can get excited about and can’t stop listening to!

The New Canon Orchestra will play works tested by the New Canon Project, where the general public listens to music and is asked a simple question...Do you want to hear that again?

Concerts of the New Canon Orchestra will include repertoire chosen from the works that score highly in the audience tests. Tests will be done through focus groups, online listening surveys and listening parties. Create your own listening parties and then come out for the fun!

When you experience a concert, you will also be able to answer “the question” for each piece presented. You won’t be critiquing our performance, you’ll be answering for the work itself. Would you want to hear that piece next year if the Dallas Symphony played it? Results will be made public for listeners and other orchestras/presenters. For the first time, they will know what new or forgotten works people would want to hear. Together, we will be creating the new canon for our time and for the future.

The first concert will include a past grand prize winner from “The Ear”, a competition in New York that invented the method we use in New Canon. Another piece is a stunning working from 1944 by Welsh composer Grace Williams, a neglected work from the past that we can’t wait for you to hear.

Come for the Pre-Party at 6:30PM. Kick off the launch with pre-concert food and drink in celebration of the launch. Pre-party ticket is $20 more and enables you to keep your drinks during the concert.