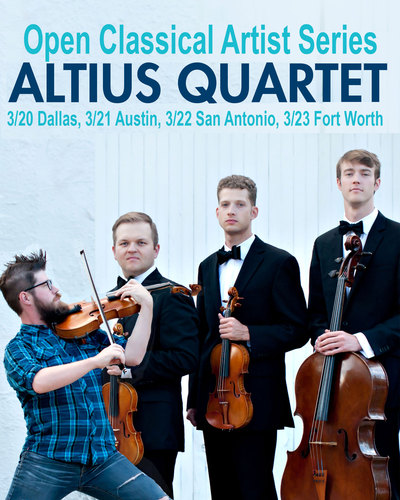 Hailed as "rich" and "captivating" by the renowned music site, "I Care If You Listen," the Altius Quartet is garnering an international reputation and enrapturing the hearts of audiences through their charisma and dynamism.  Having just released their debut album, “Dress Code,” Altius is receiving critical praise for their musicianship and versatility.

Known for their energetic performance style and friendly audience interaction, the group also peppers their moving classical performances with original arrangements of popular tunes from AHA’s “Take On Me” to Ben E. King’s “Stand By Me”.

Altius has released two albums on the Parma Label - one of Dmitri Shostakovich’s String Quartets, and the other, an album which intermingles their original pop arrangements with movements from a Joseph Haydn string quartet. This juxtaposition of their classical roots and pop edge perfectly exemplifies the soul of Altius performances!

Formerly in residence at SMU and the University of Colorado, the group now resides in Boulder, CO.

A clip from Artist Series in Austin , March 2019

A clip from Artist Series in Austin , March 2019

Audience cracks up at “Take On Me” by AHa

Audience cracks up at “Take On Me” by AHa