Presents “Classical Music and the Rise of the Sports Mythos” 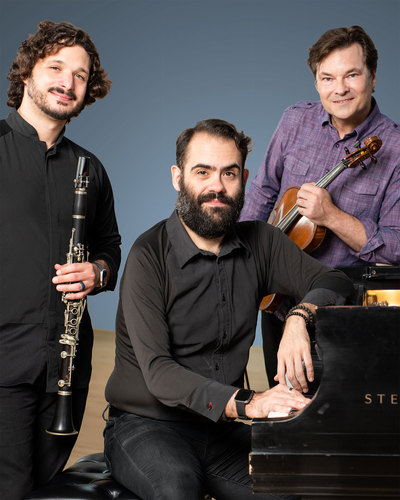 This program traces the evolution of the current mythos regarding athletics in our society and how it contrasts with the attitude of athletics and art prior to the mid 20th century. We take for granted now the aesthetic of classical music used as an underscore to so many heroic sports films, but the marriage of emotional music with the stirring retelling of heroic sports stories is an invention that developed over decades from a single surprising source.

The Marbriago Trio is made of the three most integral musicians of Open Classical’s famous Classical Open Mic: OC Director Mark Landson (viola), Dallas Open Mic host Brent Buemi (clarinet), and all-around mulit-talented piano gymnast Thiago Nascimento (piano). As colleagues, they have been the engine behind the success of Open Classical’s signature event for years, but as musical partners, they have an artistry that transcends the fun and games that so often accompanies the hubbub of the open mic event.

As the Marbriago Trio, the three have bonded musically over the years, creating their own hyper-romantic interpretations of the trio repertoire for Viola, Clarinet and Piano.