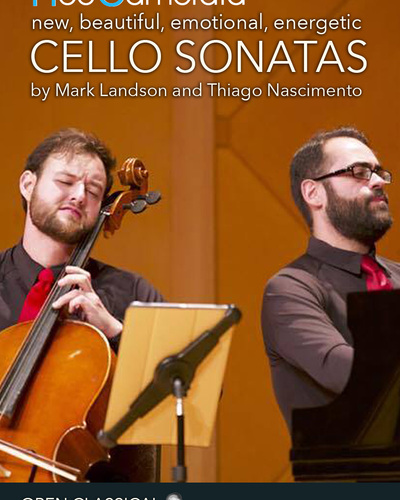 Cave Without A Name

These stunning, emotionally driven works for cello and piano are both moving and inspiring, each bearing a personality unique to its creator. Landson’s sonata, “Moments In Memory”, mixes catchy melodies, exciting rhythmic patterns and a keen dramatic sense, with a strong command of form and classical craft. Nascimento’s sonata shows a strong influence of his favorite 20th century romantic Rachmaninoff, but takes the Romantic vision to a more current contemporary direction, with just enough influences of pop minimalism to make it poignant.

Skinner and Nascimento toured with Landson’s Neo Camerata in 2015. While most music on the tour was Landson’s, Thiago’s “Cello Preludes” were also presented on some of the concerts. Wesley fell in love with the music of both composers, and when the opportunity arose to commission two cello sonatas for his DMA recital through a grant, he jumped at the chance. Formed in 2003, the group has performed at the Cannes Film Festival, the Kennedy Center in Washington, DC, and on the bill with orchestras and pop singers.

After a seven year hiatus, the group was re-formed by Landson and went on a 32 city tour in 2015 with the rock band Say Anything, also playing 25 classical concerts along the way.

Neo Camerata again hits the road in 2017, partnering with Landson’s organization “Open Classical” and “Music In Familiar Spaces” to bring the music and experience to multiple cities across the US.

“Moments in Memory”
by Mark Landson
Sonata for Cello and Piano

Sonata for Cello and Piano, “Ballade”
by Thiago Nascimento