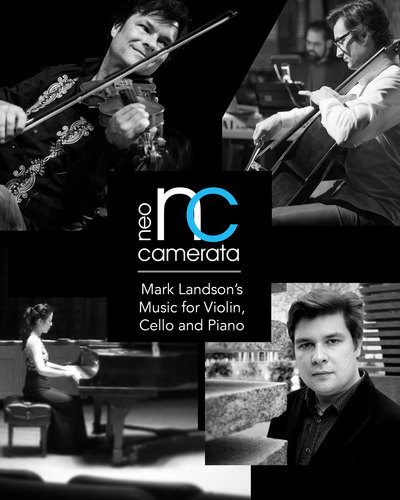 Neo Camerata presents some of composer Mark Landson’s powerful works for violin, cello and piano, including the premier of a new work.

Neo Camerata brings the vibrant and emotionally stirring music of composer (and Open Classical Director) Mark Landson to life in a program that features his works for violin, cello and piano.

“Travels” (version for Violin, Cello and Piano 2017): Infectious melodies and driving rhythms contrast with plaintive soliloquies in this metaphysical journey of an optimistic person who who strives to retain that optimism throughout times of life’s inevitable difficulties. This is a transcription of the original string quartet version, which took first place at The Ear competition in New York City in November 2016. (4 movements-25 minutes)

“Troubled Souls” (for Violin and Piano 1999): an intense and powerful journey from anger and frustration to a catharsis of beauty. (1 movement-14 minutes).

“Moments In Memory” (premier of this version for Violin, Cello and Piano 2018): Soaring melodies dominate the 3 scenes of this work, derived from inspirational moments that prompted the composer to notate melodies at the time. In 2017, the sketches formed the basis of the original work, commissioned for cello and piano. This is the premier of the piano trio version, which is now considered the preferred version. (3 movements-24 minutes)

Tickets are only $5 and available at the door.

Formed in 2003, Neo Camerata has performed at the Cannes Film Festival, the Kennedy Center in Washington, DC, and on the bill with orchestras and pop singers.