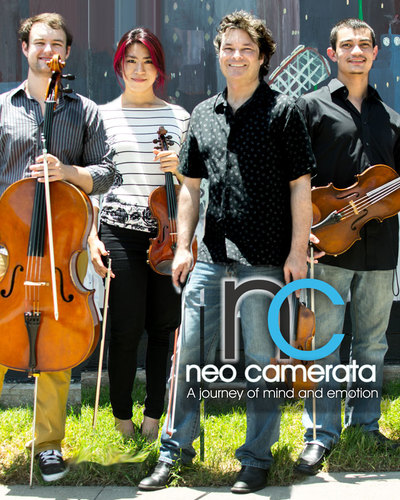 Landson formed the group in 2003 and they became a favorite on Classical radio WRR101 in Dallas, with Landson becoming one of the top contemporary composers performed on the station during that time. The initial formation performed at the Cannes Film Festival, the Kennedy Center in Washington, DC, and on the bill with orchestras and pop singers.

After a seven year hiatus, the group was re-formed by Landson in 2015 and went on a 32 city tour in 2015 with the rock band Say Anything, also playing 25 classical concerts along the way.

Neo Camerata again is performing in both Texas and nationally in 2017, partnering with Landson’s organization “Open Classical” and “Music In Familiar Spaces” to bring the music and experience to multiple cities across the US. From a House Concert in Minneapolis: Neo Camerata with the Irving Symphony 
“Travels” (version for violin, cello, and piano)
1. filled with youth and optimism
2. the eternal question
3. prayer
4. finding joy and wonder

Dream on a Cirrus Sky (cello and piano)

All works composed by Mark Landson