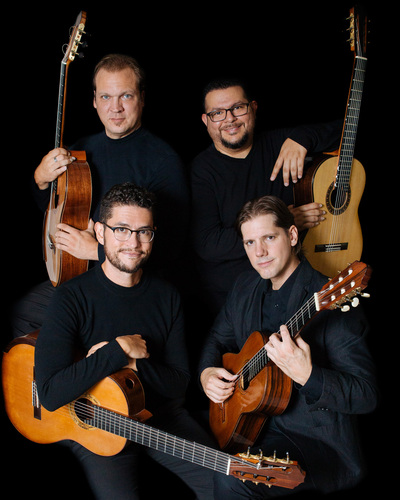 An internationally recognized touring classical guitar quartet which excels at their own unique arrangements. A musit see!

Formed in 2008, the Texas Guitar Quartet has been hailed as “Impeccable in every respect” by Classical Guitar Magazine. Throughout the United States, China, Central America and Spain, audiences have embraced the quartet for their daring programs, dazzling virtuosity and joyful music making. Recent highlights include performances for the Encuentro Internacional de Guitarra 2016 (Nicaragua), Victoria Bach Festival, Guitar Foundation of America Convention, Festival Internacional del Noreste (Mexico), and Texas Music Festival. During the summer of 2015, the quartet presented a series of concerts in historic cathedrals along the Camino de Santiago, Spain.

Red, the quartet’s first album, was released to critical acclaim and was praised by Guitar International as a “tremendous accomplishment for the classical guitar...the TxGQ perform with virtuosity, clarity, balance, and a refined character which will no doubt help to establish them as one of today’s leading guitar quartets.” Their latest album, Icon, features the complete 40th Symphony by Mozart and was released in Fall 2017.