The True (Not Exactly True) Story of Thanksgiving 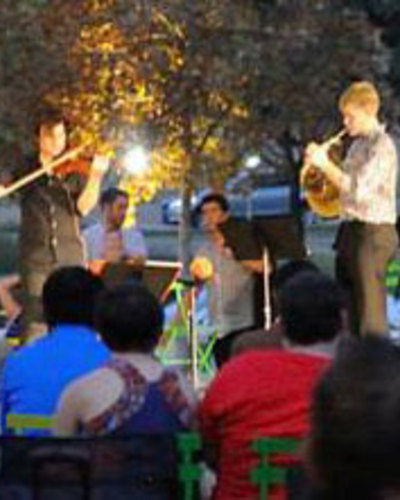 The True (Not Exactly True) Story of Thanksgiving

An original (not totally original) comic opera by Mark Landson.

An original comic opera by Mark Landson presents the real story of Thanksgiving (sort of) as told by changing the words of popular classical music masterpieces! OK, so the music part is not original, OK? Otherwise, totally original and mostly sort of true!

This show presents fascinating bits of history like the fact the Pilgrims felt they had to risk death in order to avoid listening to the Dutch language! Hear the misery as pilgrims complain they can't get a good cheeseburger! Find out the hilarious misunderstanding that led to the treaty between the Pilgrims and Wampanoag tribe that stood for more than 50 years! Plus, live roasting clarinettist Brent Buemi in a turkey suit!

This hilarious show is not to be missed!

2. The Pilgrims set out for New World
“Wouldn't you all love to go on a cruise and sit snug by the fire for a Cape Cod winter?”
Sung to Giuseppe Verdi’s "Anvil Chorus" from Il Trovatore

3. The Pilgrims arrive in the New World
“Behold this rock will be a tourist site!”
Sung to GF Handel’s "Rejoice Greatly" from the Messiah

4. Pilgrims suffer through The Starving Time
“Someone please bring me a Wendy's bacon double cheese”
Sung to Purcell’s “When I am Laid in Earth”

6. Treaty between the Wampanoag Indians and the Pilgrims
“Wait, you said you thought we’d give you WHAT?”
Sung to Georges Bizet’s Pearl Fishers duet

7. The hunt for the perfect drumstick lands a turkey in hot water
Rondo alla Turkey, Turkey in the Straw

8. Pilgrims and Indians alike celebrate Thanksgiving dinner
“Nothing beats cooking a turkey to celebrate!”
Sung to Rossini’s "Largo al factotum" from The Barber of Seville

9. Friendship Chorus Finale
“Rise up - lift your spirits as high as your cup!”
Sung to Verdi’s Brindisi Chorus from La Traviata