at the Palace Theater in Grapevine 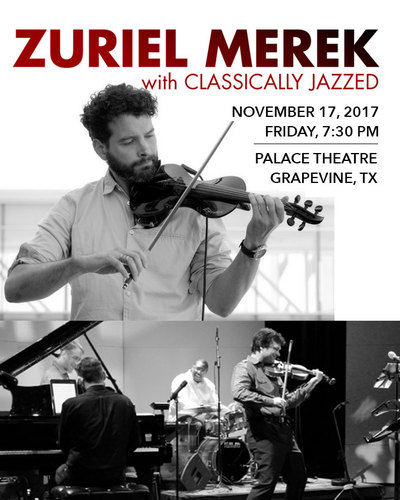 The cinematic classical/pop violinist Zuriel Merek with his full band PLUS Mark Landson's Classical Jazzed plays his reimaginings of Bach and Vivaldi violin concertos with a top jazz combo.

Zuriel Merek is a multi-instrumentalist, composer, and live looper who specializes in electric violin performances that draw from eclectic influences, utilize modern technology, and incorporate “outside the box” musical innovation. He creates beautiful, immersive music that enriches and inspires you.

He will perform a full band show featuring his 2017 debut solo instrumental album, The Tao Less Traveled, which is an original blend of alternative rock, ambient classical, and emotive cinematic soundscapes. Zuriel composed, produced, recorded, and performed all the instruments on the album.

Mark Landson’s Classically Jazzed takes classical masterpieces from Vivaldi, Bach and other composers and turns them into eclectic jazz works simply by substituting the typical orchestra of the early 1700’s with a modern jazz combo. The resulting sound is something both true to the original genius of the great composers and an amazingly contemporary expression of our own time.

Reviews of performances have been stellar. TheaterJones said “Mark Landson and his Open Classical group have done it again–they’ve made classical music both innovative and fun”, calling it a “delightful performance” with “consistently excellent musicians.” CraveDFW said “Always innovative, Open Classical just raised the bar.”